Quadron is an original arcade style game for the 48K ZX Spectrum created in the mould of the 1980s Williams classics.

Set in the Quadron complex, you are charged with the task of defending the crystals mined by the relentless onset of marauding aliens.

Featuring fast arcade style gameplay, multiple weapons, enemies, collectables, powerups, and a pointer based status screen and scanner, the game calls for both fast reactions and a surprising dose of strategy!

Planet Sinclair - "A masterpiece... Quadron has many strengths... it reminds us of Starquake or even Equinox... by the movement of the sprites and graphics, and even by the sound... this is a great game." Mega Game rating.

Fusion ZX magazine - "It’s easy to like Quadron given the skill and experience that has gone into its design and production... a very colouful game with a graphical nod to Sabre Wulf... sound effects are reminiscent of Speccy classics such as Starquake and Jet Pac... Quadron is no pushover, but it should provide plenty of entertainment and enjoyment in the process."

Retromanic - "very enjoyable and more complicated than it appears"

The Spectrum Show - "The graphics are lavish and in places are very reminiscent of Sabre Wulf... sound is well used throughout with some nice effects... the game is much more in-depth than a standard shooter... This is a well-written game."

ChinnyVision - "On the face of it looks like just another shooter but it's so much more than that... there's absolutely a hidden depth with it... This is a game I'm going to be coming back to you because once it sucks you in I don't think you're going to be getting out in a hurry... It's an awful lot of fun."

Vintage is the New Old - "sounds effects are perfectly placed... graphics are also superb... Worth waiting 30 years! If Quadron had been released where it should, in 1988, it would certainly be a hit. We are just lucky to be able to play it now."

Video Juegos Horacio - "...all masterfully combined in this arcade game, with very, very 'Ultimate' graphics... It is a very fun game."

The player controls a droid set in the Quadron complex tasked with collecting and protecting valuable crystals from the relentless onset of marauding aliens.

The complex consists of 28 screens forming a square, four of which are hidden behind force-fields that cannot initially be accessed by the player’s droid.

At the start of the game eight crystals are firmly buried within the four rocks found at the corners of the complex. Only the Probe (yellow) or Super Probe (green) aliens can mine them to release them.

Fetchers (cyan) circle the complex looking for such free crystals (white). If they find one, they’ll take it to one of the four conversion screens set at midpoints on each side of the map, blast open the force-field and use the converter inside destroying the crystal in the process and becoming much meaner Meta-Fetchers (cyan). These Meta-Fetchers will then relentlessly chase the player’s droid and are difficult to destroy, but can easily be dispatched with crystals held and launched by the player (keys V or B).

Use the SPACE key to call up the Status Screen to monitor the location and condition of the crystals and aliens in the base via the scanner at the top of the screen. Fetchers carrying crystals are highlighted magenta to alert the player. Also shown on the Status Screen are your score, lives, crystals held, items collected and their four associated energy types. Use the pointer to activate items that have enough energy to operate (represented by the energy bars).

Play continues until all aliens have ‘warped in’ and been destroyed for that wave. Should the player take too long, Warpers (yellow) will appear, encouraging the player to finish the wave as soon as possible.

Other aliens types are introduced in later waves, such as Modules, Seekers and Lurers. For more details on them and more please see the Basic or Detailed Instructions PDF files included with the download.

Click the Quadron.tap tape file or Quadron.sna snapshot file to download the game then start your favorite ZX Spectrum emulator and open the file to play.

The game has been tested on Spectrum Anywhere, ASCD, ZX Spin, SpecEmu for PC, Marvin for Android and other Spectrum emulators.

If you're looking to give Quadron a try but aren't quite sure if it's for you, download the free demo of the game below, and give it a go! For installation help, please see the instructions above.

The demo version is limited to the first level and life giving you a taste of defending the Quadron base from the relentless alien onslaught! All control options are available and if you like what you see, upgrade to the full version to progress through the waves, battle the full range of enemies and collect the complete set of capability-boosting objects.

The game was written in assembler on the 48K Spectrum over the course of two years and completed in early 1988. Sadly, the publisher (now defunct) pulled out towards the end of development and the game remained unreleased along with its plans for an Amstrad CPC conversion. Now for its 30th anniversary I've made it available for anyone interested.

While I didn't have access to the original source code, I did have many of my original notes and worked with the disassembly to prepare the game for release with a few tweaks and bug fixes.

As part of the downloads I've also made available scans of the basic and detailed instruction printouts from 1987, complete with the original spelling / grammatical errors!

In order to download this game you must purchase it at or above the minimum price of $4.99 USD. You will get access to the following files:

Happy to hear you like it, and thanks for the feedback!

what's the length of the game ?

Hi Megamanzx and thanks for the question.

In the style of the early 80s arcade games, once each wave of aliens is cleared, the player progresses to the next wave until all their lives are up. So the length of the game is dependent on the skill of the player, and there's no cap on the number of waves and no "final level".

A novice player's game might only last a minute or two, but more adept players might be able to make a single game last for 30 or 60 minutes.

Interesting game. However, I agree with the other comment here – a tape file is badly needed. ESPECIALLY given that this is a paid-for game, it really MUST be supplied in a better form than just a snapshot. That's so half-hearted. (And .SNA isn't even the best snapshot format: it's wasteful. .Z80 format does the same thing but uses a smaller file size and also supports 128K snaps.) This game NEEDS to be supplied as a .TAP file, and ideally as a .TZX file as well. The .TAP file format is best – especially for regular loaders (i.e. non-turbo loaders) – because it works with EVERYTHING, including loading into real machines. If you want to use a fancy loader, supply a .TZX file as well. (But please note that the new ZX Spectrum Next currently can't handle .TZX files, which is one reason why a .TAP is so important: it's absolutely the best option on the Next.) If you need to have a loading screen designed, I recommend approaching Andy Green, who does superb work (search for Andy Green Pixel Art on Facebook).

Interesting points! The file is currently in .sna format because that's all I originally had to work with. A tape file will be in the works for a probable cassette release :)

Meanwhile the loading screen was recently completed based on what I had left of the original screen art from 1988, and is included in the latest .sna update that just went up!

Excellent. I love 'perfect' snapshots like these, which show the loading screen until you press a key. So, that's great. All we really need now is a tape file. Many thanks for all your efforts!

I will certainly buy this if you could make a *.tzx version available (or even *.tap).

- please see the reply above!

- and the cassette release is now available at: www.cronosoft.co.uk :)

Excellent and very impressive work :)   If you are interested in a non-exclusive real cassette release, then I would be honoured and proud to help.  I have run the not-for-profit software house Cronosoft since 2002, with over 100 previous releases from many programmers. Please check me out at www.cronosoft.co.uk

Thanks very much for the kind words. I'll email you at Cronosoft! ..

Glad you liked it! Thanks for the encouragement!

The game is fast and action packed, with a real sense of running for your life when those souped-up crystal-enhanced meanies come after you.  Great to see this out there at last!

"a real sense of running for your life" - early design notes from 1986 reveal that this was just the feeling I was aiming for, so I'm happy to hear it had the desired effect! Thanks for the feedback. 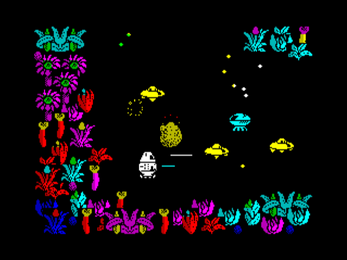 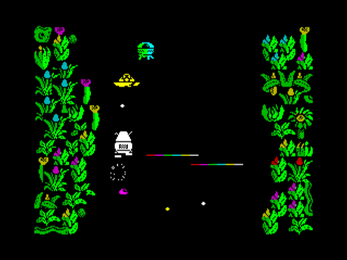 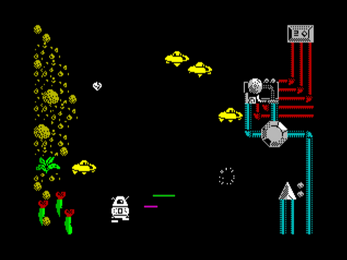